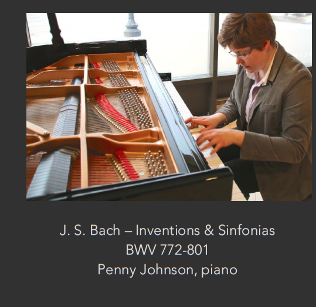 Composed in the early 1720's, this music is best known for it's pedagogical value.  These musical miniatures however, not only instruct as to the basis of good part-playing, but also bring to the player and listener, a myriad of colours and textures.

Focused on the development of a single idea rather than creating idiomatic instrumental effects, the Inventions and Sinfonias, like the Goldberg Variations composed some twenty years later, consist of thirty short and highly contrasting pieces. From the joyful exuberance and sparkling textures of Invention #8 in F-Major to the expansive, northerliness of Sinfonia #5 in E-Flat Major, the set offers a snapshot of the sonic imaginative power of one of history's great nonconformists.